Hi, would it be possible to disable load detection on PWM OUTs. We are using extensively the MC43 and require to drive some external devices via PWM. These are digital inputs on the other devices (fan controllers, pumps, etc), so they present a very high impedance. We use the "detection disable" feature on DOUTs a lot. Can we do the same thing for PWM OUTs? If not possible, please add it to futur releases. Thanks!

For driving an external device, I think that it is only the PWM out HS+LS that could work if it was possible to switch off open load detection. (currently it isn't available as a property) .  The low-side of the output could then possibly be connected to an external device with a pull-up.

I don't think the PWM out HS could work, the internal pull-up used for open load detection would cause too much of a leakage current.

Hi Gustav, we are using indeed the LS of a PWM output with a crazy large resistor right now, since we can't disable the "current check". That means we have 5W pull-up resistors just dissipating power in our harnesses!

Please add a disable option on the check, like the DOUT, in the next release, it would be greatly appreciated!

We are considering doing this, but it's on the backlog.

Converted topic from question to feature request and modified the title a little to make it easier to spot.

I am here to up vote this. I am using a voltage PWM signal to control a heater valve actuator. The actuator gets power from a circuit that is different from the PWM, and the impedance on the actuator's PWM circuitry is very high. We added a 390 ohm pull down resistor from signal to ground to solve the problem, but I would prefer to not have to heat up the wiring harness like this.

I want to emphasize that this is an excellent product and the development environment is easy to use. I think the hardware is ideally suited for hydraulic controls, but because of the overall quality of the product, it can still be used outside of hydraulic controls.

I am not sure this change would help in the case where the PWM controlled device is connected to the highside of the MC4x PWM out HS+LS, the external pull-down would still be needed.

Have the same issue with COUT output. Make a system with optional equipment, and when it is not installed we get a lot of open load errors.

For an optional COUT, there is a simple solution: Place the optional function in a function group of its own, and use a Digital Parameter to enable/disable the group. The example files shows how it can be done:

Hello Gustav and everyone,

It has been a while since this was posted, can we have an update on implementation?

We have a similar challenge with our system:

- Currently we use Digital Out HS signals (OUT_31...38) to drive things like contactors/relays - which work well. When using these DOuts to drive a signal level (enable to another controller), we frequently have to turn off the open load detect.

- We have now run out of Digital Out HS signals and would like to start using the PWM HS outputs (OUT_1 to OUT_10 which are one half of the PWM HS+LS pairs) but we really don't want to have to add a bunch of in-harness resistors to support this.

- We would only plan to use these as on/off to drive very low power relays, like 100mA @12Vdc, but we don't need current feedback/loop control.

- It is terribly inconvenient (harnessing and otherwise) to have both sides of the relays run to the MC4x device for PWM control; typically, one side of the relay coil connects to ground and the other to the Digital Out HS.

My request, if possible, would be to allow for the use of the PWM HS+LS (high side only - OUT_1 to OUT_10) drivers in the same manner as Digital Out HS (OUT_31...38) function when configured that way. Ideally, this would include the ability to turn off the open load detection - since that is why we have to add the load/burden resistors to the harness.

For a relay coil, I do not think there is any need to switch off the off-state open load detect.

It is easy to confuse the off-state open load detect with the on-state undercurrent detection, as both give the same error status in IQANdesign.

Connecting relay coils to the PWM out HS+LS should work fine when you connect both highside and lowside, as there is no undercurrent detection in this mode.

Connecting only the highside will not work, during normal operation the switching is controlled on the lowside, with the  outputs on pins on OUT_1 to OUT_10 staying on. The outputs on these pins only deactivate if an error is detected.

But there is an alternative to gain more individually controlled highsides.

For the Highside-Lowiside combinations, we decided to not add any option for disabling the off state open load detect.

The problem is that if an external source is to be connected to the PWM low side, another check would have have to be disabled too, the check for reverse feed. 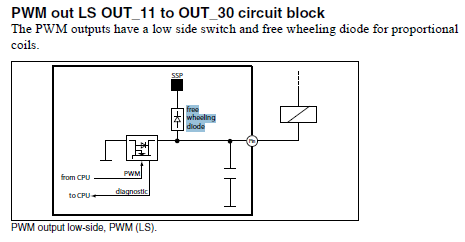 Even though the pull-up on an external device is not causing reverse feed (as current is so small), the check for reverse feed will not be able to see the difference. And that check is too important to be disabled.

On a related topic, for high side outputs there will be an option for this:

Let us know if you get an update to disable all those. It's pretty a nightmare when you want to "overide" signals on retrofitted systems that already have their own pull-up ! Strangest thing happens this morning, on a MC43-FS, we got the critical error output status between C1:30/42 even if we reset the output (disabling-reenabling)  and finally switched to the C1:31/43 and everything is now fine with the same reset method. We tried with another unit and react the same !

These work arround (add a resistor, increase the load, add an inductance, add a diode... ) is enough trouble, time spend and electric harness complexity increase, for us to consider to switch technology choice to "dummy" controllers (we just implemented microplex 7X MRS) as slave outputs :(  We would be ready to pay for this update for sure !