Shown in the picture the counter selected has 2 increasing single object arguments driven by directly by the 2 digital inputs, shown above the box. This is recording actual inputs from our machine, the digital in is not capable of being latched in the program nor in the increasing object. On the resetting side the Stop input is reading correctly. The single was deleted and a new one was added, with the same result. The new single was deleted and dual set up oppsite of the resetting was added, with the same result where both read 100. Design 6.06.10.7344

In order to move forward with the machine, the Stop single was deleted as I found it was redundant for what I was accomplishing.

Apologies for the grainy picture as I had troubles with the screen shot on the computer.

I would not classify this as a bug, but it is a somewhat obscure behavior that has led to some confusion over the years.

That the Increasing group is not being calculated can be observed on the gray box underneath the list of Increasing objects. 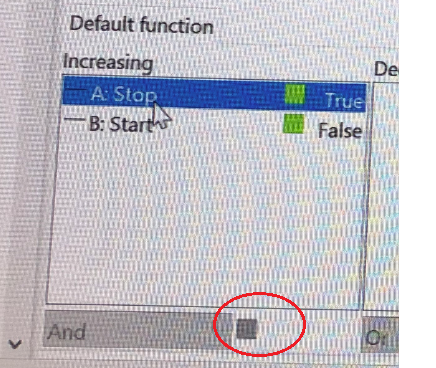 The confusing part is that the individual Increasing objects are not updated, even though they have no effect they appear with green status boxes and their previous values.

Thank you Gustav, it worried me that if it wasn't correct here it may not have been elsewhere. I don't believe I have ever noticed the indicator lights at the bottom of the box. I don't know if this defeats the purpose of not evaluating but it might lessen confusion if the arguments were grayed out as well, indicating that they aren't being evaluated as if everything was ok.

You are right, if the module would go through the objects and actively set them to not evaluated individually, that would impact the calculation performance. But maybe we can make something smarter on the PC to gray out these objects.

0
Not a bug
Gustav Widén (System support) 1 year ago