Is there any reliability data for these modules (non failsafe versions)? We are using modules for control system functions and to see if they comply with basic performance levels (b). Is there any documents that are available showing MTTF of these modules that can assist with calculations?

I see the manual includes this:

IQAN-MC4x performance only runs a sub-set of the MC4xFS functions for internal diagnostics. Because of reduced diagnostics, DC and thus SFF and PFHd is not available for these modules.

But we were able to get reliability data for XC2X range at one stage even though this was not a safety controller, is this likely to be possible with the MC4X?

I am not too keen on creating a document with MTTF for the "performance" versions of the MC4x-series, as you have a much better option for safety functions; the IEC 61508 SIL2 certified IQAN-MC4xFS.

You could work out a number based on the official values for IQAN-MC4xFS, that is something I have recommended in applications where MTTF was required for other purposes than safety of machinery.

But as you write that the purpose is a safety function (with a modest PL), my recommendation is to switch from MC41 to the IQAN-MC41FS.

Is there any information available to assist in calculating mttf data for this module? We are using it for operating a valve and internally we have identified it would be best to reach something similar to pLb in terms of complexity (if it were a safety function). Im struggling as i cannot calculate without numbers!

Also is there reliability data for a LST joystick aswell?

Well.. I don’t like the idea of using the “performance” version instead of the FS, but in the Appendix A info for the MC4xFS, you have the data you need to make a rough calculation. 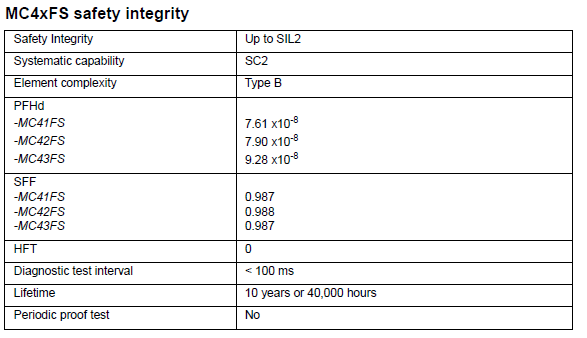 There you find Probability of Dangerous Failure per Hour (PFHd), the value you would use for an IQAN-MC41FS susbystem. That is the result for the MC41FS when analysis of the failure modes (safe/dangerous) and diagnostic coverage are accounted for.

For the HFT 0 architecture, λdu is equal to PFHd, so even though the total is not printed, you could calculate it from

This calculation will be close to the total probability of failure, but not exact. It is missing failures for components that are not a part of the safety function.

Going from probability of failure per hour to Mean Time To Failure is just a matter of taking the inverse, and getting the unit right.

By assuming MTTFd=MTTF (counting all failures as dangerous, the most conservative estimate), you have a value you could use.

As a side note, it could be interesting to know that this is lower than the value you would get if we were to provide you a document on the MC41 “performance” version with MTTFd calculated for use in ISO 13849-1.

The calculation for the IQAN-MC41FS is made for IEC 61508:2010 and include both hard errors (permanent) and soft errors (temporary bit flips). That level of detail is missing in ISO 13849-1.

For the LST, you can find the MTTFd in the Appendix A of the IQAN-LST  instruction book. There is also a separate document for the LST that provide more detail on failure mode and distribution.

Looks like we may be better to stick with the FS version, least that way all the information is documented. Thanks for your assistance.