Our latest generation of controllers are finally ready for production. The IQAN-MC4x family is the fastest and most capable controller range we have ever done. It comes in three sizes to support any application size, from the entry level task oriented control up to the high I/O configuration for complete machine control.

First out from the production line and available now for deliveries is the performance optimized version of IQAN-MC43. The IQAN-MC41 and IQAN-MC42 will start shipping next month (December 2016).

Work is ongoing with the Functional Safety versions and units capable for implementation of SIL2/PLd safety functions is planned for production Q3 2017.

On December 15th, we released the IQAN-MC4xFS series, with safety certification by RISE. 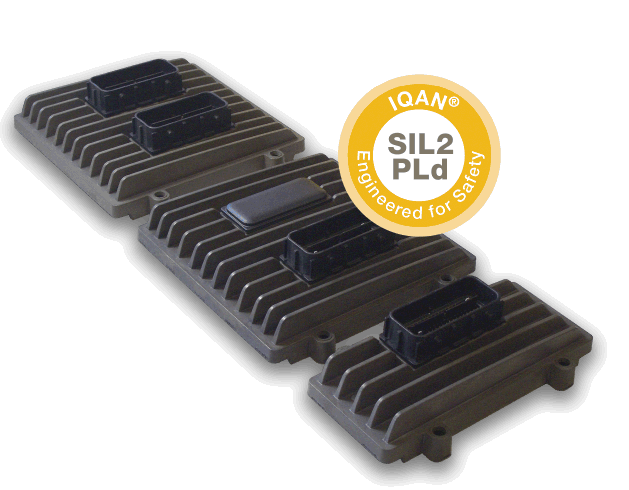 The release means that we now have SIL2/PLd versions on all three sized of the MC4x series:

You can read more about the new product in the press release.

With the original 2006 release of the EN 13849-1 standard, there was great emphasis on on calculating hardware reliability, but requirements on safety related embedded software was not as clear as in IEC 61508. Now with the new 2015 update there is a clear limit, implementation of PLr=a and PLr=b functions are accepted on standard controllers, for PLr=c and higher, the use of controllers with safety certification is necessary.

To learn more about this topic and how to design complete safety functions in accordance with EN 13849-1, you can sing up for the IQAN focused training on functional safety.

For documentation of the MC4 product series, see the instruction book.

I recently discovered that the MC4x family does not have a RTC pin and therefore when you go to pull a log on a file, it simply gives you a "start number" and a base line of 12:00:00AM. This is not sufficient for what most of my customers needs are.

Are there any plans to add in an RTC pin to enable us to have actual time available when logging.

AxelC 7 years ago in Master modules / MD4 • updated by Gustav Widén (System support) 5 years ago • 3
We are in Thailand where average temperature is 35 degree Celsius.

We have 2 MD4 on 2 project, they are hot when running, internal sensor tell 52 degree Celsius minimum most of the time. It is really hot on the finger, our customers are a little worried.

We also have MD3, they are also at more than 50 degree but we don' t feel it on the buttons.

Does all the MD3/4 get hot like this? Is there recomendation to reduce that?
Vote

Does anyone know if it's possible to get replacement clips for panel mounting of MD4 modules?

Every once in a while they get lost in the assembly process and I've been unable to find a source to order replacements. 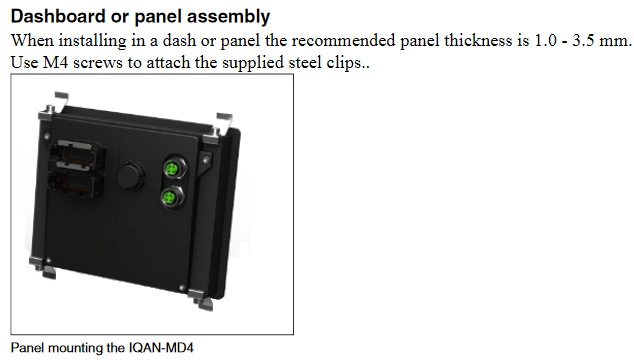 I have connected a buzzer to my MD4-7 inch display using the DOUT channel.

The signal receives high frequency noise when it is not triggered. Could this be related to the diagnostics tests for internal faults?  - If so how can it be switched off via IQAN design.

20077778 fits to IQAN-MD4-7
20077779 fits to IQAN-MD4-5
The kits include black countersunk screws for mounting the bracket to the display.
Hole pattern supports mounting of RAM or Southco tilt swivel mount.
Manufactured in black ED-coated steel.

Would be nice for MD4 displays to have day/night mode where background and text properties would change without the need of creating extra layers.

MC43FS - Are there any plans to upgrade RAM/Flash on this module ?

This module supports alot of IO and 5 x CAN. Very simple functions to serve all of the IO and CAN easily burn the available resources and I am wondering if there are any upgrade plans ?