We have an application for some voltage signals to be connected to the MC3 application. We have selected an XC23 module which compares a VIN signal on the MC3 with a VIN on the XC23. We have two of these functions (1 x MC3 VIN and 1 x XC23 VIN = one of two comparison functions in the application) measuring two different positions using sensors.

We have found that one set (an MC3 and XC23 VIN comparison) seem to follow almost exactly, however the other pair, the XC23 signal appears to increase and decrease in approx. 20mV steps. We are using VIN E and F on the XC23 and it appears the VIN F is causing the stepped signal even though it looks like it should have an accuracy of 1.22mV.

We have changed the sensor and XC23 module, but still appears to be doing it. Is there any reason for this behaviour? I have checked the VREF in the application, and all the VINs are configured to the correct reference voltage. 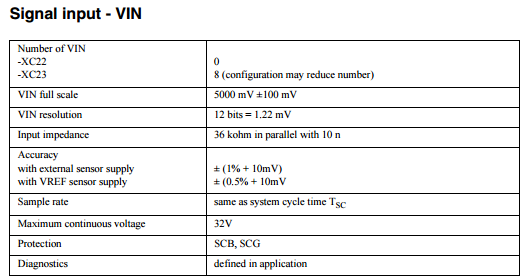 Have you tried routing the cables differently as an experiment? One guess is that it could be picking up some interference on the signal wire. (a good reason for using the dual signals by the way)