One more colour for reference lines

Hi, today we have silver and red reference lines. Furthermore we have the possibility to show all or only the lines from a component. When I select a component, the associated lines are highlighted a little bit with a thicker line. But it is still hard to see, if you got a mesh like I have here below.

Wouldn't it be nice if we add a third colour to highlight the lines of the selected component?

Barth Hollanddrain 5 years ago in IQANdesign • updated by Nick Pridham 2 years ago • 5
Is it any way possible, or be made possible to create subgroups in the adjust-groups?
The applications we create use a lot of costumer-dependent values.

We use the MD4/5 screens on our machines, also to adjust values/parameters in the program.
Calibrating our systems takes a lot of time now, simply because of scrolling and searching for the right parameter.

Having sub-groups would speed things up.
Also having those subgroups optionaly password-protected would be a good addition.
Vote

Nick Pridham 6 years ago in IQANdesign • updated by mgoutier 1 year ago • 5
New channel type to transmit and receive MD4 controller information to and from remote IP addresses.
Vote

On the tools menu, there is a new CAN database feature for  .DBC file import. After importing a DBC it is easy to automatically generate JFIN/JPIN, JFOUT//JPOUT, GFIN/GPIN and GFOUT/GPOUT channels from the database.

A  J1939 library is included in the  CAN database menu in IQANdesign. It gives easy access to creating channels with the standardized PGN and SPN numbers and names. Note that timeouts and transmit rates needs to be set manually. 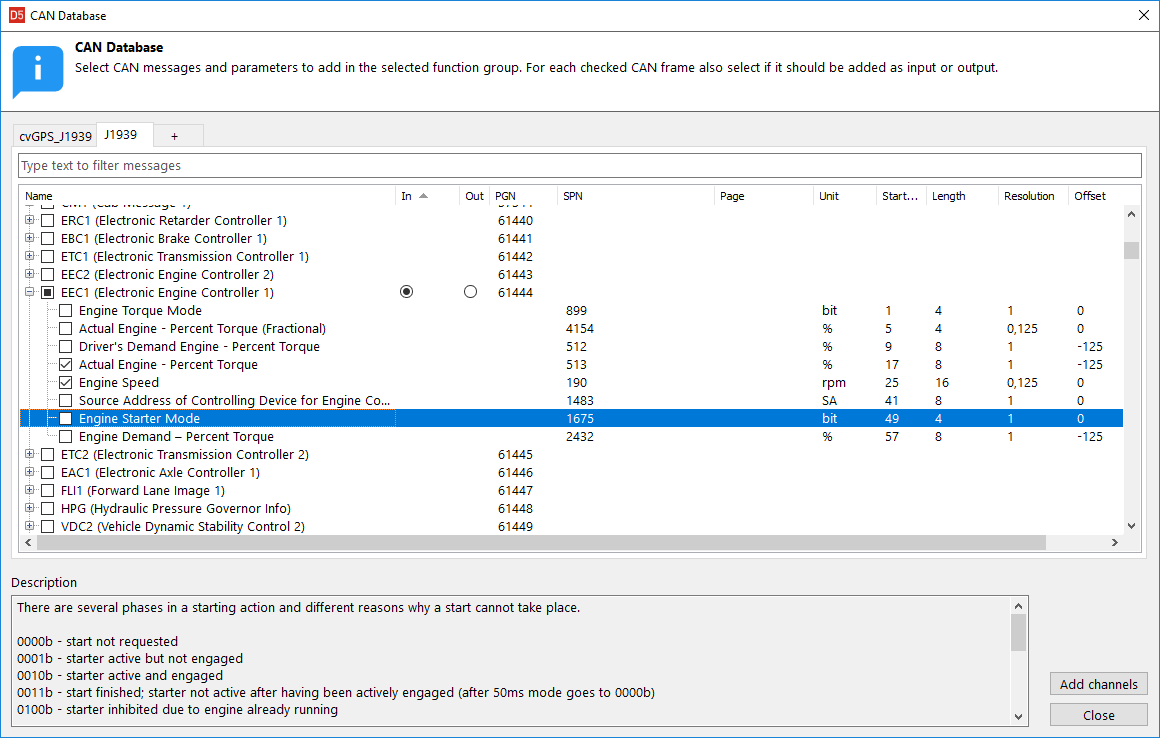 DM1 out
There is now a built-in function for generating outgoing DM1 messages based on channel status. Drag the channels to the DM1 out container and set a unique SPN number for each.
The length of the outgoing message is determined by number of channels with a warning or error status. FMI is set based on the channel status.

Connect button
A Connect button with a drop-down for selecting the communication interface has been added to the IQANrun start page. 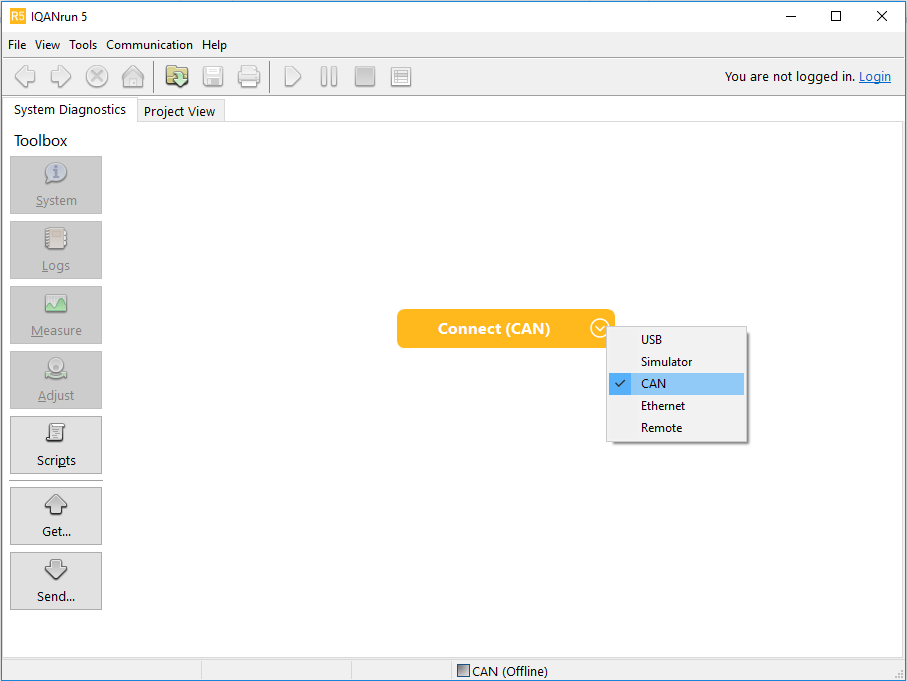 Multimeter
The IQANrun multimeter button brings up a free floating window where it is possible to make a new measure group on the fly.

Channels can be added from the existing measure groups, and also the module block diagrams and application view if this is visible. 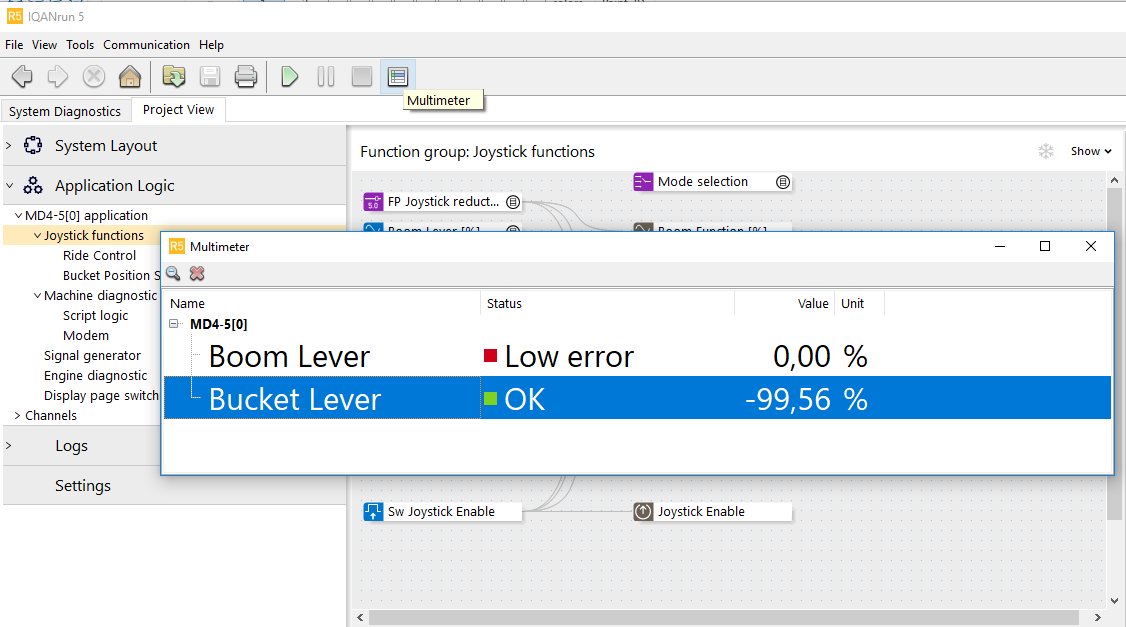 IQAN expansion bus
The use of IQAN expansions in systems with short cycle times is improved by two small changes. Property 'Sample rate divider' is clarified by changing it into "Polling cycle time", and an estimated CAN bus utilization project check is added for expansion buses.

Property to disable undercurrent detect on Digital out HS+LS added.

Zoom support in page editor
Makes it possible to zoom in and out in the display page editor. 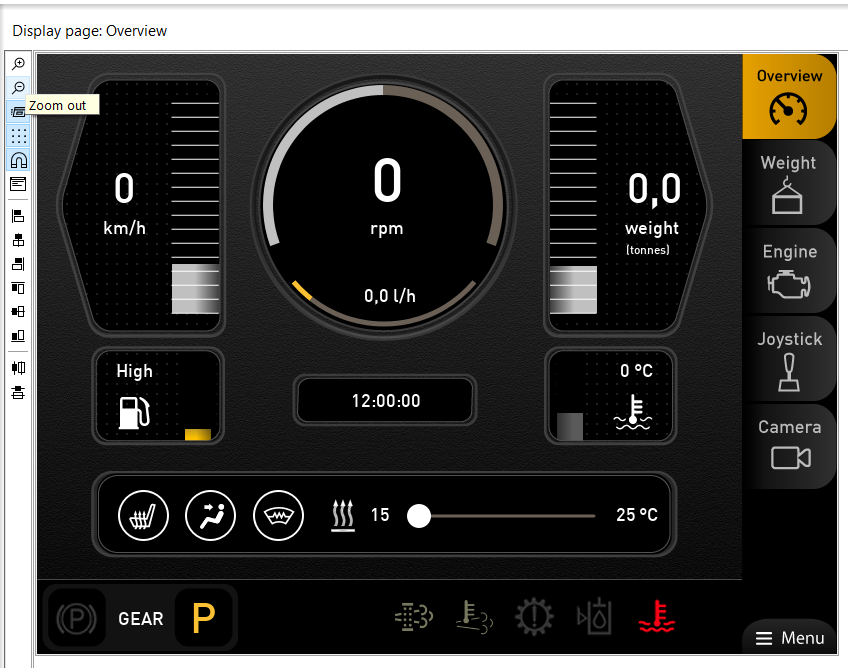 We had an issue with a customer where we were expecting to have pull-down on digital inputs on an MC41.   (we were always true on the digital input)  We identified the problem and moved to some other pins that were pull-down.  It would be very helpful if the pictorial in IQAN design would identify this on the pictorial.  (Similar to how the MC2 shows low side outputs).

AxelC 6 years ago in IQANdesign • updated by Ulrik Zakariasson (Software development) 6 years ago • 4
Hi
I am making the same interface in two version, one on MD3 and one on MD4.

In the md4, I can't have an action selector on buttons, it is possible on the MD3.
Is is something forgotten on the MD4?
Vote

Qcode is a text-based programming method available on all channels with function. For each function, it is possible to select whether to use Qcode or the classic method Object List.

Improved state machine with transition conditions, this makes it easier to implement functions like sequence controls. 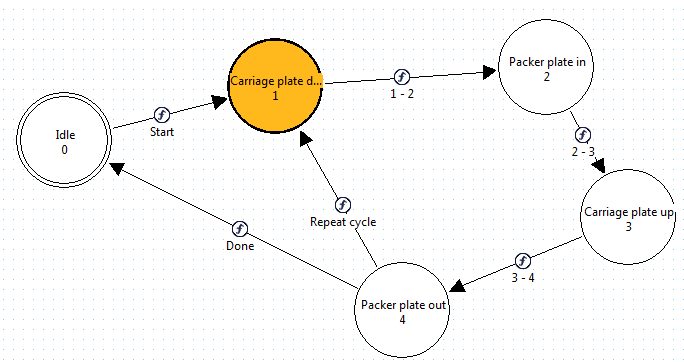 Comments can be placed anywhere in function groups.

The array channel is used to store multiple values in a single channel. The stored values can be accessed in other functions by indexing the array. There are also special array functions that perform operations on all values in the array such as finding min, max or average.

Now possible to have multiple instances of IQANdesign open at the same time. Copy and paste works between instances.

Line and bar graph display controls for IQAN-MD4. Used to draw a graph of a channel value over time. 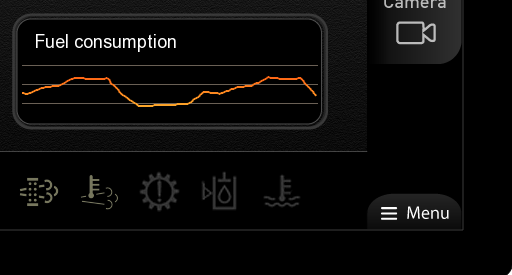 When using an array channel the complete array is drawn as a graph: 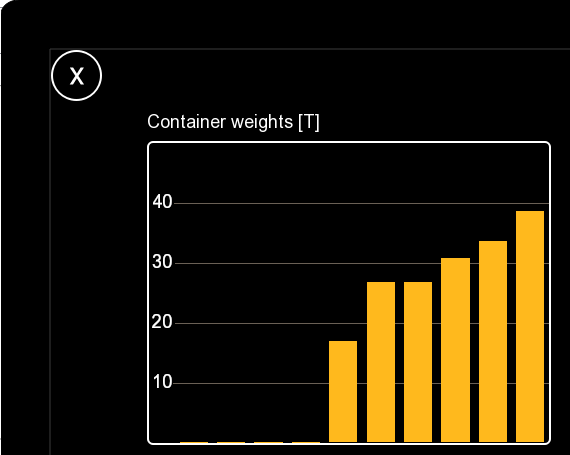 It is now possible to add PDF files to project files for viewing on IQAN-MD4.

The IQAN-SV is an Ethernet camera which requires minimal configuration. More information will follow.

Added property "Destination address (DA)" to JFIN/JFOUT. The new property is enabled when PGN is in PDU1 range. In previous version, this had to be calculated as part of the "PGN" property. 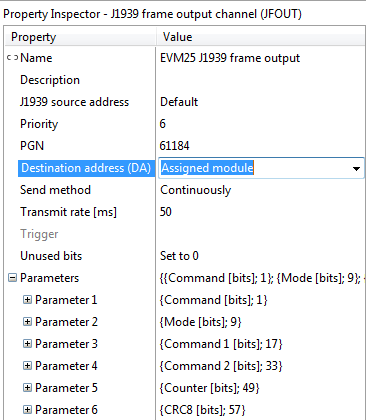 A new way to connect remotely via Internet where you pay per connection. The IQANconnect service is available for beta testing, more information on this will follow. 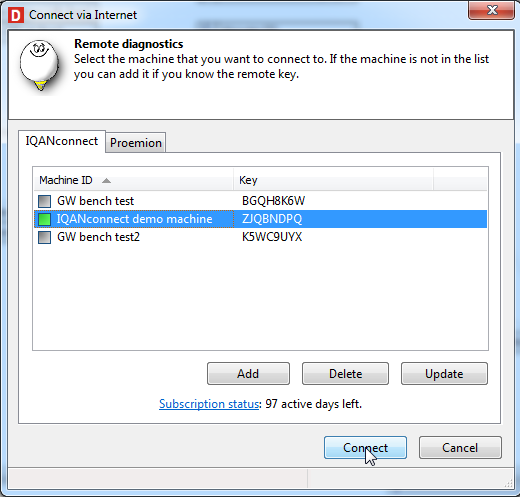 For more details on the IQANdesign 4.00 news, see release notes.

IQANdesign 4.00 is fully compatible with project files created in version 3.

A hint is to look through the examples and solution library files that install with version 4, you find them under:

these files have been updated to give examples of the new functionality.

When IQANdesign 6.00 was released about a year ago, only modern modules recommend for new designs were included.

Looking back, I think that the focus on focus on MD4- and MC4-series as the master modules on the platform has really helped in keeping up the pace on new developments.

On the other hand, there has been some debate about this decision.

While the older master modules like MD3 have reached their limits in terms of functionality growth, it is more feasible to keep software support for XA2/XS2 expansions in the modern master modules.

I see two main cases for having XA2/XS2 in version 6:

-Upgrade the many MD4 + XA2/XS2 systems that exists to benefit from version 6 features.

-Adding  XC4x modules to existing MD4 systems without having to remove all XA2/XS2:s at once, for example to avoid having to rewire a complete machine when prototyping.

It won't change the fact that the XA2/XS2 are mature products no longer recommended for new designs, but we are now planning on having them on a legacy tab in version 6. 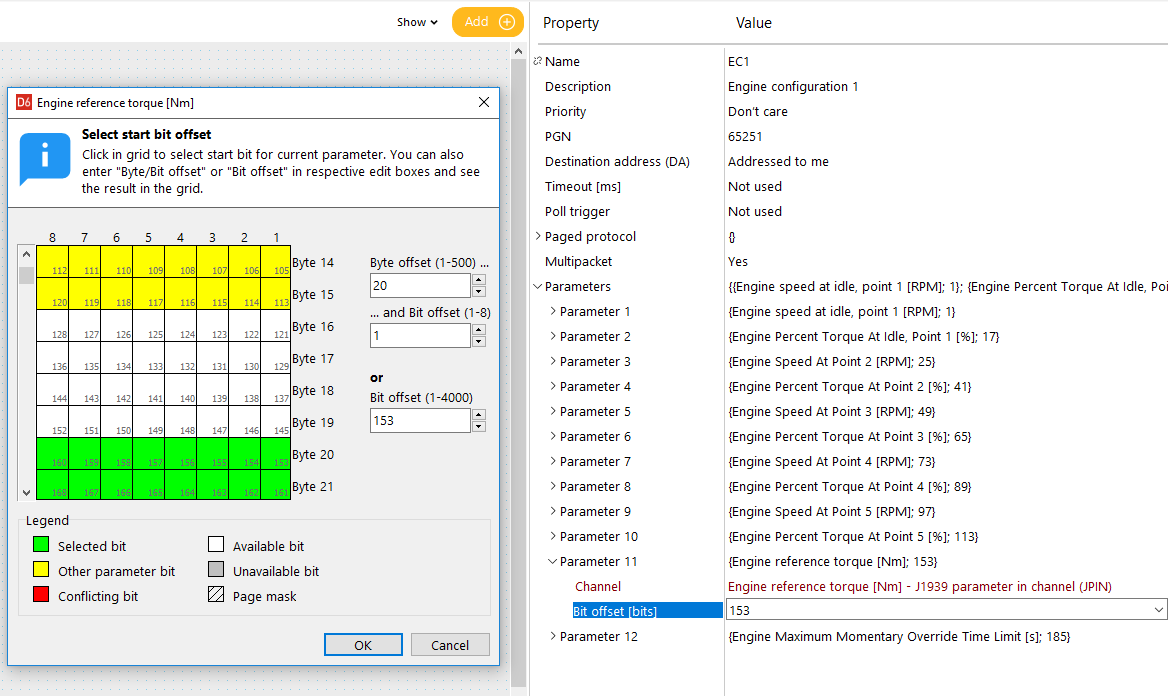 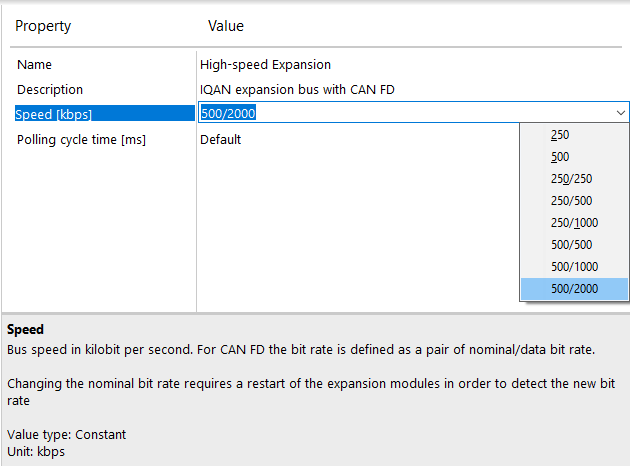 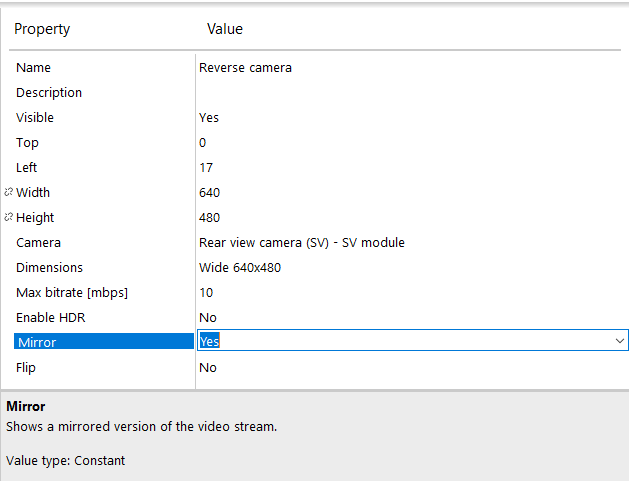 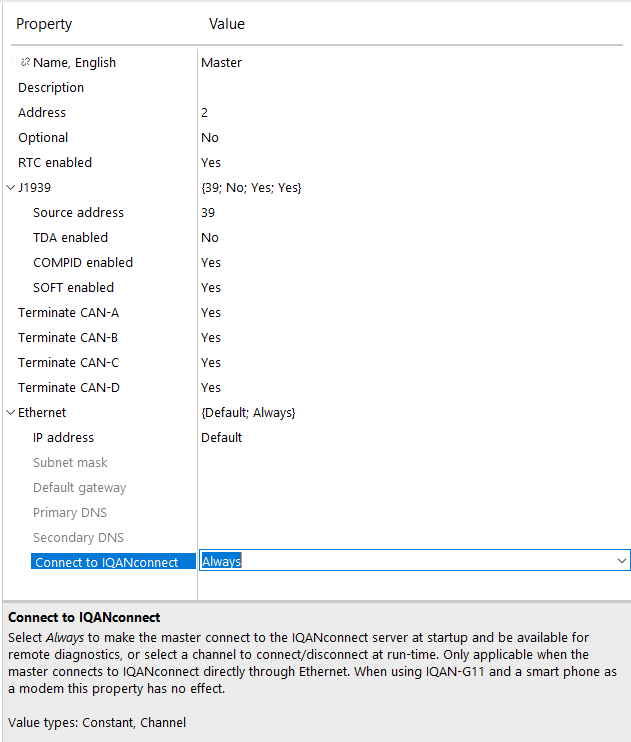