On a original Tigercat vehicule 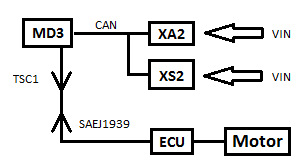 My custumer want to add one MD3 and one MC2 in the tigercat to drive one other accessories
my system: 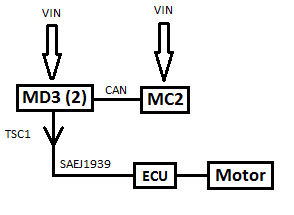 My VIN must accelerate the engine and my proportionnal outputs. ( automotive system ) 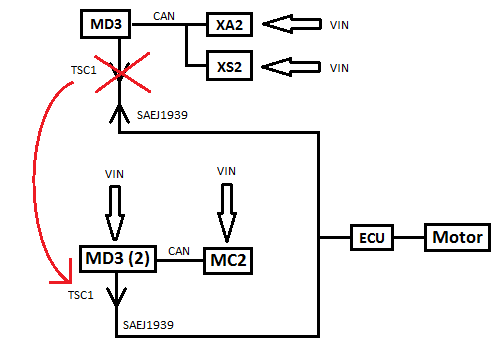 I don't have the original program of the vehicule (picture (1) MD3, XA2, XS2).
Do you have a solution for stop the TSC1 transmission on the original MD3 or other solution?

Please feel free to contact me if you have any questions .
Vote

I need to find the best method to do a sequencial communication.

Actually I need to send canopen packet in order and I need to respect this order.
As I can have multiple item, required or not (enabled/disabled) to send.

For example, with a scanreco remote control LCD screen I need to :

- Clear screen
- Activate FrameID of each component required to be visible on the screen
- after this I'll need to update each FrameID value with a 250ms timing.

Actually I was able to do this for testing purpose, but the program is a bit messy.

Sequential safety validation. Each step need to be validated in a specific sequence and in case of condition lost, I'll need to start again from the first step.

In case of lost of the fence or door signal, I need to restart from the beginning this sequence.

I have in mind to use IDC + counter to do this, but I'm not sure to be in the right way.

I'm looking if you have example or recommendation to do this ?
I'm sure you notice that it's my very first project!

When is IQAN Design 3.15 due to be released?

Kevin 8 years ago in IQANdesign • updated by Ulrik Zakariasson (Software development) 8 years ago • 2
We are waiting for a couple of fixes to be released in 3.15, and I think 29th January was mentioned previously for the release of the updated software, can you confirm when its being released please?
Vote

Richard Staite 8 years ago in IQANdesign • updated by Ulrik Zakariasson (Software development) 8 years ago • 3
Can you give me any pointers as to whether it is possible to achieve multi touch functionality on the MD4. I need to be able to activate two on screen buttons simultaneously and in this case toggling one and then activating the other is not really appropriate.
Incidentally it would be nice on Virtual digital inputs to be able to reset the toggle by means of an external channel - so that the button stays depressed (colour changed) until it is reset either by touching it again or by the channel selected.
Vote

Jean-Marc Zanni 7 years ago in IQANdesign • updated by Ulrik Zakariasson (Software development) 7 years ago • 3
I was working with the Navigator window opened in the center of my screen, working on logic. I mistyped the variable and the type ahead error Pop-up appeared. But it was behind the navigator page. I could not close the navigator or reach the pop-up. I had to kill the application to unlock the system.
I would also suggest that this lookahead error pop-up is very annoying. If I mistype one letter (which happens often) it shows up I have to switch to the mouse to clear. Why not wait until I press the tab button to give me a chance to correct my typing mistake?
Vote

Can you pick up open load and overload only errors on MC3 outputs?

Kevin 8 years ago in IQANdesign • updated by Gustav Widén (System support) 8 years ago • 3
We need the system to display an error message and restrict certain functions only when an open load or overload of an output occurs on an MC3 controller.

The only way of picking up an error message appears to be in the system information function, but this seems to be a blanket error flag that could be a fault with any part of the control system (including v ref, batt voltage etc). We would ideally only like to pickup on an open load or overload.

I see there is module status, but that only shows 9 different items. Is there an option to pick up on only the open load and overload error of an output on an MC3?
Vote

Not saving Function group input when Public variable are used

When the program run correctly. But if I change the software and or save and close the next time I open the project the assignment disappear and I get an compile error for an undefined input to the function group.

Iqandesign with Windows 10 on Surface Pro 4

Has anyone tried using Iqandesign with a Surface Pro and Windows 10? Do the drivers work for USB (MD3) and ethernet (wireless) for MD4. I travel quite a bit and would like to reduce the weight of my computer/charger.

Nick Pridham 8 years ago in IQANdesign • updated by Jan Gillesen 8 years ago • 1
Please add a table function to the project properties.  It will then be possible to add full and detailed project development notes inside the project file without the need for additional external documentation.

Please add window sizing to the comments table.  This will help with viewing of large amounts of project develpment information.
Vote

Not sure how transitions and state changes are handled or may be this is an issue with the simulate application. I am not a big specialist of state machine but it was my assumption that the rules were to

2) Set state based on transition calculation.

3) Execute code corresponding to state (not directly applicable in IQAN)

Because my code was not working as I expected I wrote a small application:

Goal Have a toggle function every time I press the button, I switch state. basically a toggle.

remark: There was technically a transition from state 0 to state 1. Event counter 1 should have increased. It did not. Changed transition Default>State1 to happen after first scan. Then counter reads 1 but is stuck.

Is this the expected result??